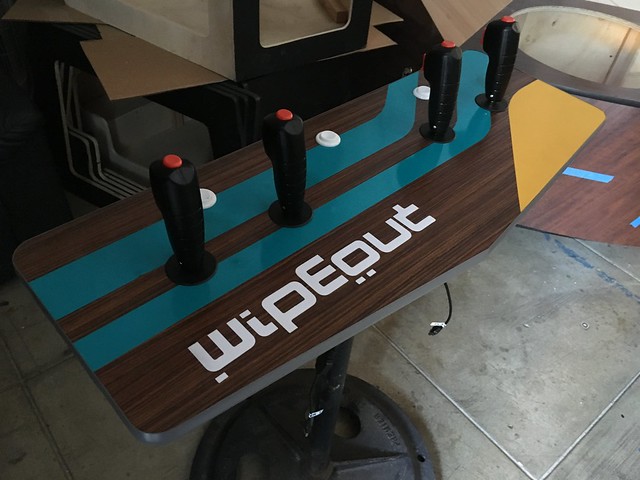 This year we celebrated Ninjapenguin 13 by throwing a Hackers (1995) themed party. In the movie, they visit a club called Cyberdelia where in one scene the two main characters take turns fighting for a high score in Wipeout. One of my contributions to this year’s party was to recreate that experience.

Embedded above is the scene in question. In the film they’re playing a beta version of the original Wipeout that would be released for the original Playstation the same month as the film; the scoreboard animation is not in the game. There were a couple elements I wanted in my design: they’re using a projector, with a pedestal console, with dual trigger joysticks. 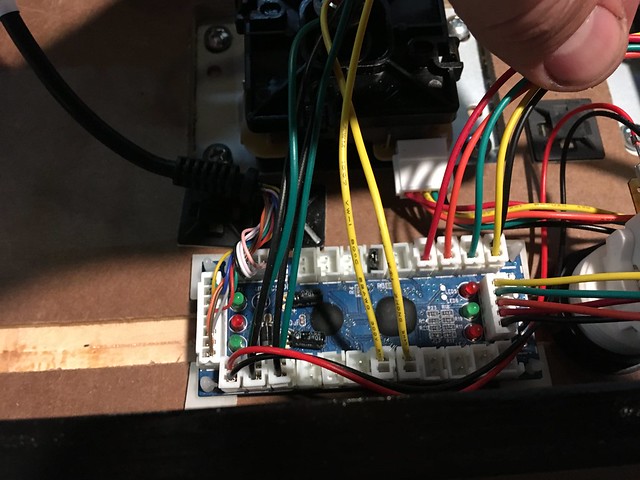 The movie took its artistic licence, now I get to take mine. I wanted to build a two player console since head to head battles would be more fun at the party than time attack. The depicted control scheme is also not great; Wipeout doesn’t require twin sticks to fly since the original Playstation had just a d-pad, shoulder, and face buttons. Luckily it didn’t use a lot of buttons and I could assign the two buttons on each stick to the most import features: accelerating, air braking left/right, and firing. I made both player sticks appear as the same d-pad. 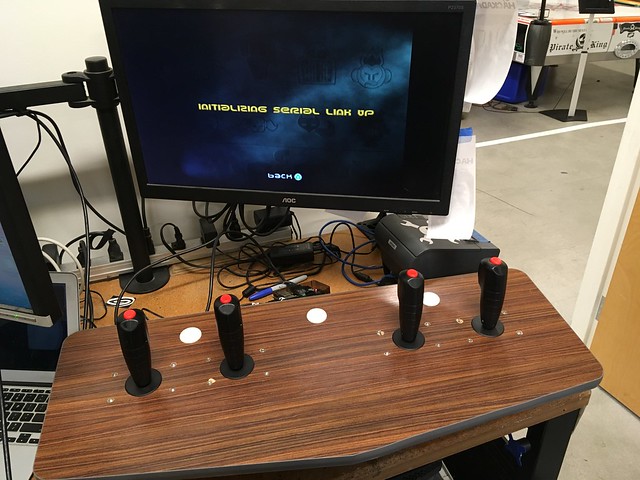 I wired up my first pair of sticks using a generic arcade USB control board and they worked great. When I went to test the second pair of sticks I discovered something unfortunate using the emulated version of the original Wipeout: two player mode requires a link cable connected to a separate console. I’m sure this was because single player was already pushing the console’s 3D abilities as hard as they knew how at the time. So another deviation from the film: we played Wipeout 3, released in 1999, the final Wipeout game released on the original Playstation and the first to feature two player split-screen.

The look of the console was created using a vinyl cutter and references the style of “Feisar” one of the in-game racing companies. I chose wood grain laminate for the top of the console because I think it says “retro arcade”, but I also find it funny that it’s being used on a game from the ’90s about racing in the 2090s.

I could not have completed this project without the help of my coworkers Forrest Lucas, Conor O’Leary, and Tim Groves. We cut the profile out on our CNC router. The base of the pedestal is just as important as the controls; I didn’t want someone knocking this over accidentally. I used a 50 pound circular lighting stand plate for the base. I cut down a piece of steel lighting pipe to thread into the base and support the controls using a pipe flange.

I really love the finished project and was glad I could contribute to the atmosphere of such an awesome party. I’m not sure what to do with it now though. As I said, the controls are bad for Wipeout so maybe I should make it a dedicated twin stick console that plays Smash TV, Total Carnage and the like.

One thought on “Wipeout: Hackers edition”