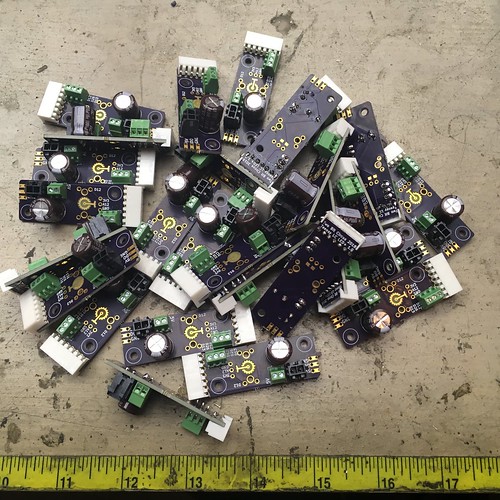 I work with Teensy dev boards and LED strips fairly often. Connecting the two to each other seems to be something I’m constantly reinventing. Here’s my most recent attempt at a board I could use for both quick prototyping and permanent installs. While I mill a lot of prototype PCBs, this is only the third board ever that I’ve had professionally manufactured. This time via Oshpark. 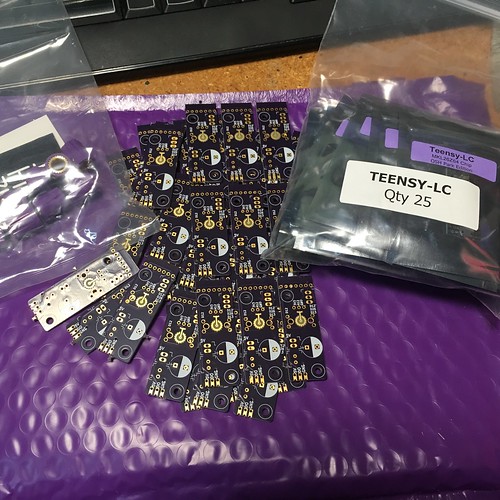 I had a work project that was going to have 20+ LED strips each driven by their own computer over USB so I thought it was a perfect time to make a board for a quick reliable install. The Teensy LC (Low Cost) is both incredibly cheap and has a great feature for this project: a 5V output buffer for driving WS2811, WS2812, or SK6812 “three-wire” addressable LEDs. I had a few other design goals in mind: 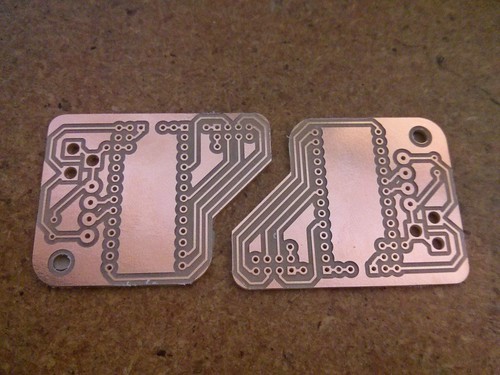 Usually when working with Teensies I put pin headers in the outside rows so I can plug them into 28-pin 0.6 inch wide DIP sockets (you should do this too!). Pictured above is a board laid out that way for use with four-wire LEDs, barrel jack, and an NRF. Unfortunately the 5V buffer on the LC, for compatibility with other Teensies, is not connected to the long sides of the board but is on the end instead. I chose to make the Teensy LC pluggable by using an edge connector. On the breakout side I used a 7 pin receptacle from the Molex 4455 series. It’s got ears that hook over the board edge to keep it flat. The LC plug side is a 7 pin from the 171857 series. These connectors are from Molex’s KK 254 product family that work well with any board/protoboard because they’re 0.1″ spaced, have polarized orientation, and have a friction detent to keep the connector from sliding off. The sooner you start using these in you project instead of standard “dupont” pin headers, the better off you’ll be. They crimp easier too. Dirty Cables calls them KF2510; I usually keep a stock of Newark’s generic product range: MC34 Series. Looks like you can get a starter kit for cheap. Grab a crimper; this one works on many styles.

For the power connector, I went with a Molex Micro-Fit 3.0 43045 two pin vertical wire-to-board header. I chose them because I wanted something like the JST SM series that you find on every single roll of LEDs, but in a version that allowed wire-to-board connections in addition to wire-to-wire. The pins handle up to 18AWG wire and the header is rated to 8.5A. The header also has kinked pins which makes it hold tight to the board while soldering. There’s also a 2-pin terminal block on the board for power. If the Teensy isn’t going to be powered over USB, a 5V wire can be run from the Teensy to here (I did this in my Hypnobuckets).

I included a 1000uF cap to prevent any voltage droop with big current changes. I’m using 16V caps which are much shorter than the pile of 20V caps everyone seems to have. 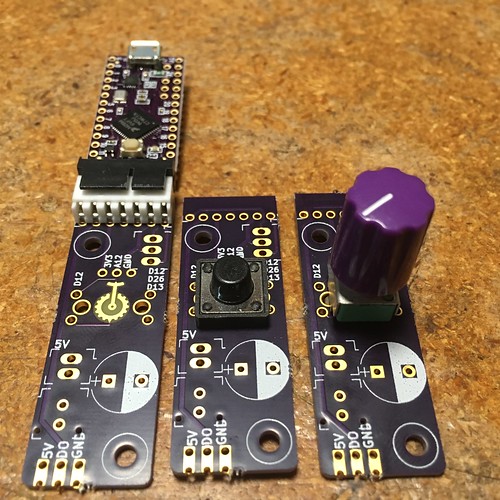 I wanted a button or potentiometer on the board. This is one of those nice-to-haves that I never bother wiring into my projects. I stacked the pushbutton and potentiometer footprints on top of each other in KiCad. The button is connected to D12 while the potentiometer is connected to A12. I could have put them both on the same pin but I wanted to be able to install both components back to back. That’s what I’ve got in the Hypnobucket, although I don’t have the button implemented. I also added the Two Bit Circus logo to the board in copper and connected traces to each half of the logo to act as a contact closure. This doesn’t work. Well, it works if you lick your finger first.

There’s a 3-pin terminal block for GPIO on the right-hand side. It has D12, D26A12, and D13 broken out. The GND side of the power terminal block can be used with the GPIO for additional buttons. There were no plans for this in the project this board is designed for, but I didn’t want to have to bodge something together if we added an external button later. The beautiful purple Davies 1900H style knob I believe came from a John Park tip.

The end of the breakout board has three copper traces that go all the way to the edge of the board. As stated before, this is for attaching three-wire LEDs. The edge of the board is castellated to allow the solder to wick into the board. You can also solder a pigtail directly to the board; I sized the througholes at 0.048″ to make it easy for up to 18AWG wire to pass through. They’re also spaced at 0.1″ if you want a pin header instead.

The final feature is mounting holes. Always add mounting holes whether you think you need them or not. These a sized for a close fit 4-40 screw. The Teensy itself does not have a mounting hole, but I’ve found that placing a zip tie mount under the board positions it at the perfect height and gives it a way to be secured. The width of the board is the same as the Teensy that plugs into it so they could be placed into a narrow housing together.

These boards worked out well for their intended project and I definitely reach for them everytime I’m starting a new project. If I were to add anything, it would probably be another Micro-Fit 3.0 connector at the LED breakout. I’d take advantage of that by ordering matching 43025 connector pigtails from Dirty Cables.