I built this infinity mirror in the Spring of 2017. Like the Tardis before it, I wanted something different than a standard rectangular infinity mirror. I went with an isometric grid of glowing triangles. At the time I was wondering about LED displays that weren’t just giant matrixes. Luckily I had most of the materials required already on hand.

I thought that following this grid pattern I could do effects like coloring individual triangular cells, drawing lines along the 3 axises, or drawing isometric cubes and animating them. I designed the triangular panel so that two could be cut from 4’x8′ sheet goods. The triangles are also laid out so that multiple panels could be put together seamlessly. The wall thickness and corner radius was picked to not overbend the LED strip and also to have the LEDs land evenly between each corner.

The triangular grid was cut from a piece of 3/4″ plywood on our CNC router by my coworker Conor. The backside was pocketed down to ~1/8″ at the triangle corners to allow the LED strip to be run from triangle to triangle unimpeded. It also makes the LED strip lay along the center of the plywood edge. In most places I could use plastic spring clips to clamp the LED strip and get good adhesion while installing. The front is a sheet privacy acrylic we had already which is lucky since it would be hard to justify the expense and privacy film isn’t easy to apply. The back was a custom cut mirror from a local glass shop. Protip: never pick up a 16sqft piece of glass yourself when you have the option of it being delivered. We got our second mirror delivered.

I really really didn’t want to do a lot of soldering on this project and was hoping for a fast assembly. I designed the LEDs to be laid out as a continuous run with both ends of the strip exiting the frame on the right hand side. Seven individual strips covering a horizontal row of four triangles each. All I had to do was add the input pigtails, supplemental power on the tail end, and … realize that half my APA102 strips had the clock and data pins in a different order. 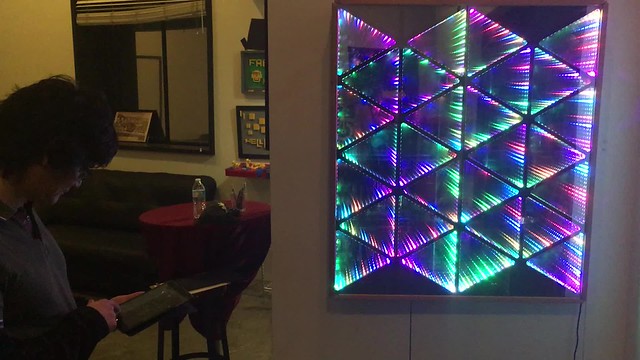 When I initially built the mirror I used a PixelPusher on the LED side and L.E.D. Lab on an iPad to control it just like the Space Camp sign. After a while I ended up roasting a couple channels and switched to a PixLite controller by Advatek. They have fused channels and you don’t have to sign up for a forum to begin searching for their documentation. 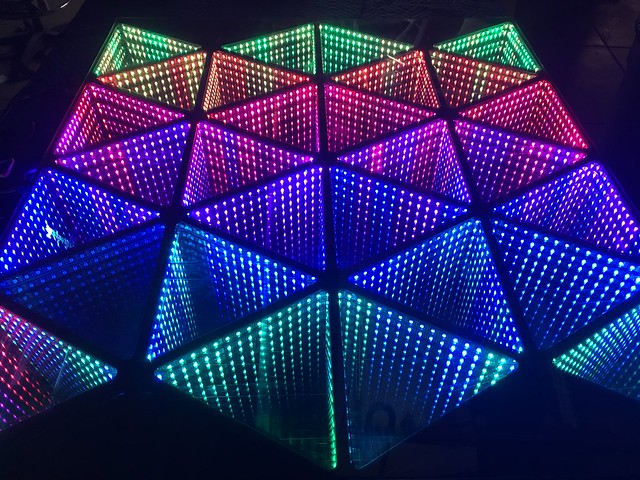 The mirror has appeared in a few places over the years. I’ve taken it to both Fuzzyland, Hackaday Supercon, and Space Camp. It spent the month of December outside at LA’s Grand Park as part of their Winter Glow celebration. I’m told they liked it so much they had it at their NYE party too. I’m just happy the controller, iPad, and Meanwell’s low profile LRS series power supply ran so well. 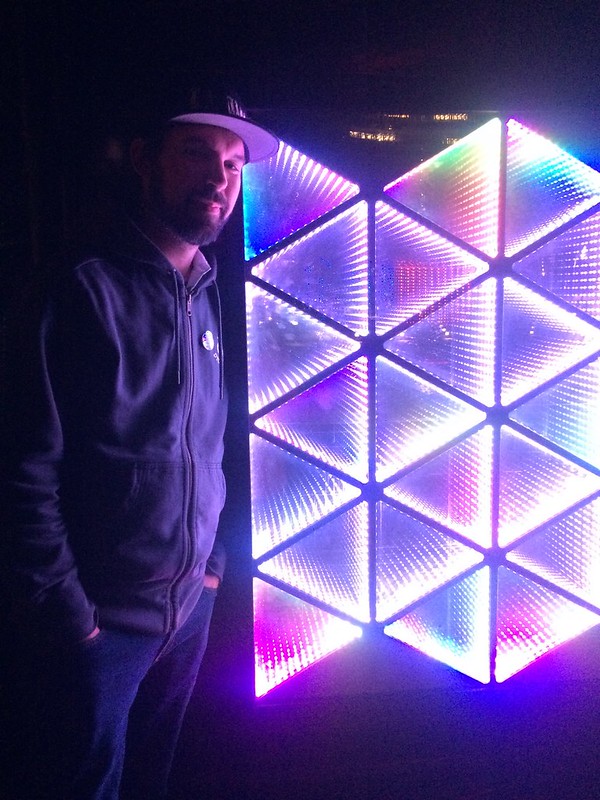 Did I achieve my vision? Not entirely. The mirror turned out great. But as usual I failed to write proper control software to do anything truly interesting with it. People still love it though and there’s always potential for the future.

One thought on “Isometric Infinity Mirror”