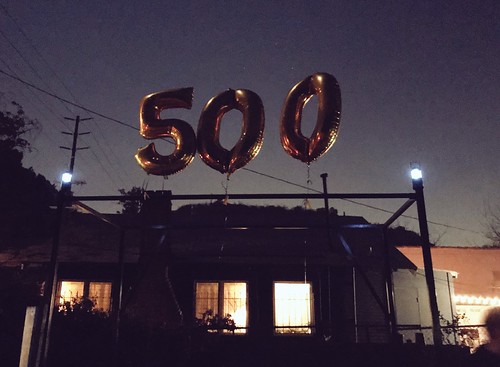 We celebrated our five hundred and fiftieth Hacker Drinkup yesterday so i’m overdue to write a second post about my weekly event on this blog.

Hacker Drinkup was conceived while out to lunch at Yard House Pasadena (never go there) May 17th, 2008 during the LayerOne security conference. It seemed like most people at the table were from the westside so I collected contact info with the plan to meet the very next week. Our initial target was 7PM that Tuesday but schedule conflicts meant our very first “Santa Monica hackers meetup” happened 8PM WED May 21st, 2008 at Ye Olde King’s Head in Santa Monica, CA. 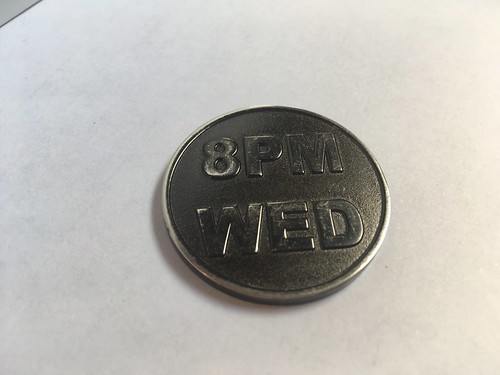 8PM WED. Every Wednesday 8PM. Hacker Drinkup happens every week at the same time because it’s following the lead of european hackerspaces, which have regular meetings 7PM Tuesdays every week. The idea is that even if someone can only make it once a month, they’ll at least know if they show up on a Tuesday, something will be happening. Even if someone hasn’t been to a Drinkup in years or are from out-of-town, they could pick any Wednesday to show up and know they won’t miss out. We actually lucked out by not having Tuesday work for our very first Drinkup, because when hackerspaces eventually opened in LA, we didn’t conflict with their meeting nights. 8PM WED is also a fun reply when people ask for any information at all about the event and hackerdrinkup.com has carried this one true fact for years, only revealing more information if you click-through 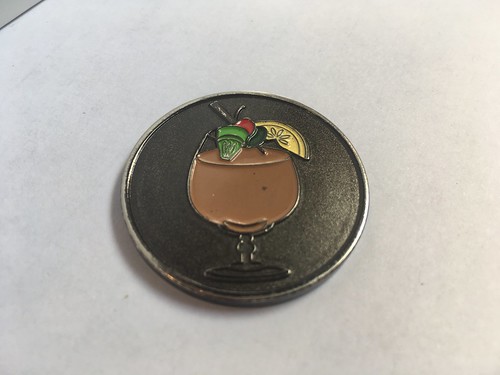 We hopped around English pubs for the first few months, but starting August 20th, 2008 we became regulars at Rick’s Tavern in Santa Monica. This is the fault of our savvy waitress Alia who would reserve the small back patio just for us, buy us shot rounds, and offer a late night happy hour. We would stay there for many years, only venturing elsewhere for special events or when she was on vacation. We eventually left Rick’s after it changed owners and Alia quit.

I got lucky moving to Santa Monica and starting this event. cnelson and skout23 were two friends I had made at separate hacker conferences that just happened to live in the area and were at Hacker Drinkup from the beginning. Eventually, more people I had met on the other side of the world would also join in. If I hadn’t started this event, I probably would have been a recluse, but instead I made friends that I vacation with and have built many crazy projects with. When I lived in Vegas I met up with members of a sport bike forum once a week which certainly contributed to my sanity and I’m sure gave me the desire to continue that experience in California. 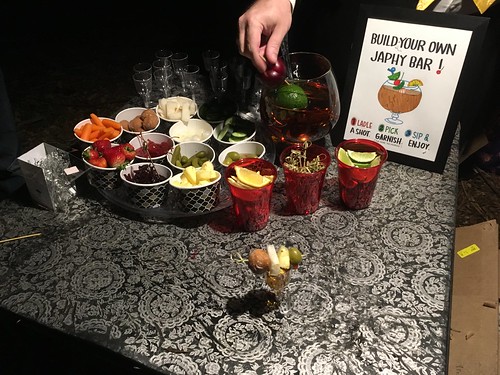 We’ve been pretty good about celebrating our milestones over the years. We usually do a big call-out for any multiple of 100 and put on our tuxedos. Even last night for 550 we had regulars and people I hadn’t seen in months. Last January we celebrated Hacker Drinkup 500 in the art park near my apartment. We made a Build Your Own Japhy Bar for the occasion. The Japhy is Hacker Drinkup’s signature drink and logo. Our friend Japhy once asked Alia for a shot of the well whiskey, “… but can you make it fancy so I don’t feel like I’m drinking well whiskey?”. She delivered the shot in an aperitif glass with one of each of the cocktail garnishes available at the bar and a legend was born. Our Hacker Drinkup 500 Japhy bar included a similar shaped glass but the size of a punch bowl. We filled it with Tullamore Dew, Alia’s whiskey of choice. Attendees ladeled a shot of whiskey into their tiny Japhy glass and then selected from a broad range of garnishes: cocktail onions, cornichons, lime, lemon, pineapple, maraschino cherry, hibiscus, olive, strawberry, jicama, donut holes, carrots, and I’m sure some others I’ve forgotten. Fun times were had by all and it was great to have so many long time friends back together.

When I moved to Highland Park five years ago, I took Hacker Drinkup with me. Attendance isn’t as high as it used to be but it can still be surprising. It still brings fun like-minded people together and that’s why I keep with it. We don’t have a regular bar anymore but I have a handful of favorites. The Gold Line makes it easy for me to get anywhere from downtown Los Angeles to Pasadena so the pool of bars I’m picking from is pretty large. When picking bars I’m looking for a few things: Can handle a group of at least six with room to grow. I try for bar service only since I don’t want to split checks with strangers or people departing at different times. Food is also important since not everyone likes alcohol but they certainly appreciate a good meal. The downside of hosting something every week is that you can’t scout new venues on an off week. You do need to do some research to make sure you’re not walking into trivia, karaoke, or open mic nonsense.

I’m not sure how much longer Hacker Drinkup will last, but it’s still got some years ahead of it. I hope to see you there soon.

There are more fun Hacker Drinkup photos on Flickr.