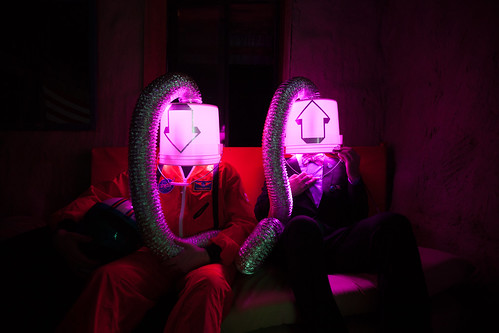 Rarely does an idea take hold of me so strongly that I’m compelled to build it immediately, but that’s what happened when I saw this tweet about @kuwala’s awesome Hypnobucket. From my previous time playing with Brain Machines I knew that the effect would be interesting. The robot face doodle and the desire to make people put buckets on their heads really took it home for me. 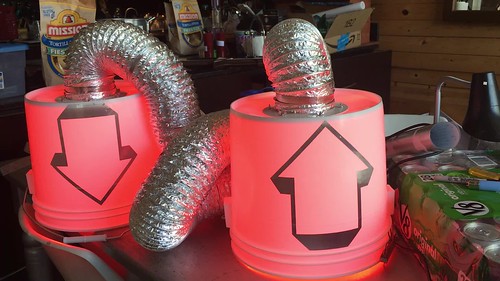 The buckets flash red and blue at a rate from 5-50Hz. In my original design I had a sliding potentiometer but I now use a knob style one to control the flash rate. The user places the bucket on their head and looks at the white inner wall of the bucket that the flashing LEDs behind their head are diffusing across. Your eyes/brain don’t really know what to make of the flashing light and start showing you geometric patterns and false colors. These patterns vary greatly across the frequency range. I like that the hypnobuckets specifically play with a part of human physiology that everyone has but no one is aware of until it’s specifically twiddled. The same way an optical illusion makes you suspicious of reality. 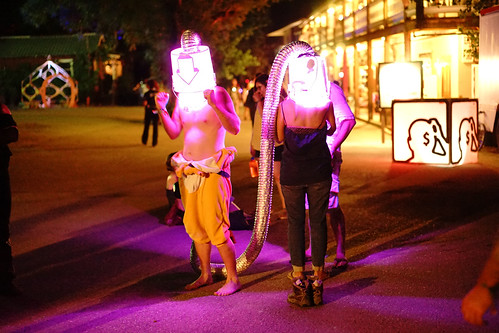 My version features two buckets connected by 20ft of shiny dryer hose with an internal wire electrically connecting the two. The second bucket flashes identically to the first and has no controls; one person is driving the experience while the other is along for the ride. Because of this, I’ve got them decorated with Above’s arrow motif and jokingly refer to them as a brain transference device. The participants can talk to each other through the hose which is a very cave like experience. I could imagine adding an inline fan to pull air from one bucket and push it into the other to make the “transference” even more unnerving. I knew the first place I took them would be Space Camp 2017 which certainly bolstered my enthusiasm for the project and desire to make the experience weird. 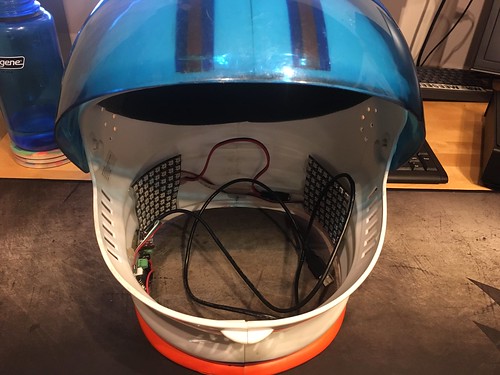 Last Summer, Space Camp and Toorcamp were back to back in two different states so I decided to make a second Hypnobucket device so people could experience it at both events. I installed two LED panels in my space helmet plus a custom circuit board I had built specifically for adding LEDs to Teensies. You have to look at the helmet’s white chin strap to get the effect since it’s not an all encompassing bucket, but it still works.

Of all the projects I’ve built in the last decade, this one has probably been experienced by the most people that are strangers to me and they absolutely adore it. At Priceless two years ago it wandered off for the night (it was on battery power) since people wanted to share it with everyone they met. Fall 2018 Slamdance DIG invited me to be one of their artists and show the Hypnobuckets at their showcase of Digital, Interactive, and Gaming Art in downtown LA which went really well.

There’s more to be explored with the Hypnobuckets: changing color patterns, guided programs, air movement, audio, and other accessories. Since I’m just flashing single colored lights, I could make a 555 based version of the system with no MCU. I’d want to have a matching vintage presentation if I did that. There’s at least one company that has commercialized this flashing light experience for $50 a person. Thank you Pinguino (top photo) and Ashley Aull (festival photo) for capturing photos of the buckets in use. I’ve got more Hypnobuckets photos on Flickr. If you’d like to build your own buckets, I’ve got a BOM below. They’re all Amazon affiliate links and at the time of writing the cart is ~$112.

Dr. Reshanne Reeder has been studying ganzflicker and reached out to me to participate in a Ganzflicker museum exhibition. As part of the exhibition, they constructed their own pair of Hypnobuckets! I realized that my original post about the Hypnobuckets doesn’t have near the detail needed to create your own copy so here is some more info that should help:

Here’s a PDF schematic of my original two bucket setup. I drew this in Fritzing to hopefully make it more novice friendly. Here’s the Fritzing file which is probably unecessary.

Here’s the Arduino source code I run on the buckets. The only changes I made from the original author are what pins the LEDs and potentiometer is attached to. I chose the Teensy LC to drive this project because of its pin specifically designed for driving 5V LEDs.

The wire connecting the two buckets together is 3 conductor 22 AWG. It’s easy to find this in bulk sold with addressable LEDs. I use a 3-pin .093″ Molex connector to connect the buckets together through the dryer tube (for some reason the product photos for the linked Molex kit always have the wrong pins installed in the wrong housings). Any connector that matches 22 AWG wire will work.

Pictured above is one set of four LED strips with their power lines soldered in parallel. One of these sets goes behind each ear in the bucket. They should be 90 to 120 degrees apart behind your head. This is to keep the LEDs out of your periphery while not having them so far back that your head occludes them.

This should be enough info to get the adventurous started. Still on the fence? Dr. Reeder created an online experiment for you to try out. Also, for a better understanding of the ganzflicker effect check out this article.