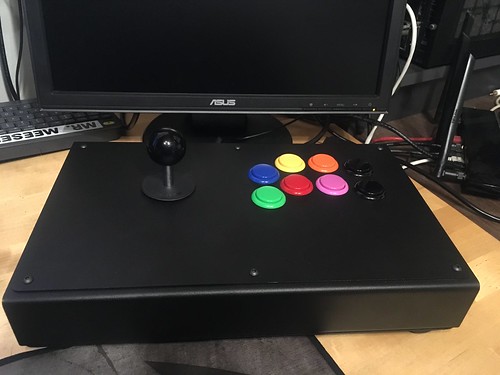 I’ve recently been dealing with a lot of arcade controls at work and wanted to talk about how much I like All Fight Sticks product. I’ll also take the time to talk about some of my past and future arcade projects.

While “pro” level arcade fight sticks are readily available for the home consumer, finding one that’s all metal is uncommon. I came across All Fight Sticks product line a year ago when I was considering building a 2-player pedestal for playing with a projector. They’re based in Norcal and have made big increases in their production in the last year to the point that it’s no longer just one person. They sell all metal powder-coated fight stick housings in different colors and three different sizes. Depending on the size they can be customized with different button layouts: common arcade patterns, button only patterns, and even WASD mechanical keyboard style. (If you’re making your own controls, you must check this incredible resource out.) While they don’t stock everything large online arcade parts stores (e.g. Focus Attack) have, they do have everything you need to build a great custom stick.

Over New Year’s weekend I purchased one of their semi-modular 14″ bodies and a button plate. I saved money by buying a grade B body from their clearance section and I can’t tell what could have downgraded it; it looks great. I had a Brooks controller and all of the Sanwa controls on hand already but I did pick up a 20-pin harness which is huge timesaver if you’re using a Brooks board. If I we’re building from nothing, I’d probably buy the non-modular 14″ Namco Noir 8 to save some money; the overall build would be ~$210. I have the semi-modular body because I knew I might make my own layouts for it. 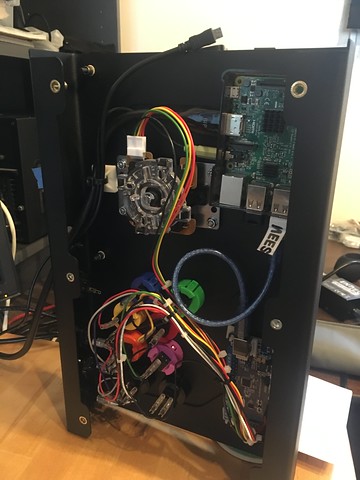 The reason I bought this case now is because I’m considering building my own arcade machine again. Over the holidays I saw lots of deals on the Arcade1Up 3/4 scale machines. I decided that I didn’t have the floor space for the machine nor did I want to do the hacking to get it to run whatever I want. I do like the flat pack nature of it though. I decided that a bartop style machine would probably be what would work best so I ordered a monitor and built this fight stick to at least start playing with the components. You can see above that I stuffed a Raspberry Pi 3 into the case. Audio, HDMI, and DC power are routed through the center hole. I installed RetroPie and plan on adding Pico-8 to the menu. I purchased a 1280×1024 5:4 ratio monitor because I thought it being more square than 4:3 and a factor of 128 would make Pico-8 look its best. Now that I’ve got this together I can play with the software side of things and feel out the ergonomics of a bartop machine. 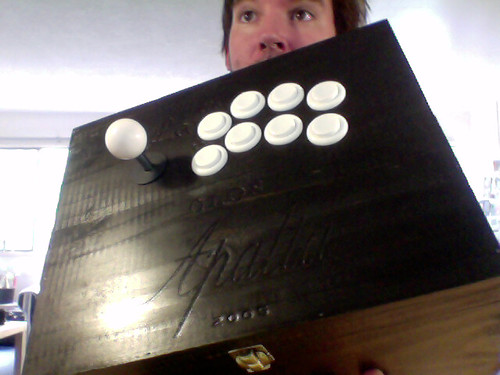 This isn’t the first fight stick I’ve built. A couple years ago I turned a discarded wine crate into an arcade stick with a pico projector inside for an art project. I was warping live gameplay using audio input to make a music visualizer. You can see the classic Rutt/Etra video synthesizer style luminance warping in my example video below. I’ve been meaning to revisit this audio visual project and maybe a fun bartop machine would be a good platform for it.

At work this month we’ve been testing some new analog Sanwa sticks, so I knocked together a crude joystick made out of a sturdy MacBook Air box. When we were building controls for our VR motion sim I used two giant analog sticks mounted to an apple box to simulate an Xbox 360 controller. I’ve got a photo of it while playing the game Tumbleseed.

Finally, I wanted to talk about fight stick control boards as they relate to my work. The Brooks boards I mentioned at the beginning are pretty standard among fight stick builders. The most important feature I’m looking for in custom controls in this age is XInput support. If a device uses XInput, it can appear to the computer to be an Xbox 360 controller. While many games will advertise that they support controllers, what they really mean is they support Xbox 360 controllers perfectly and that generic gamepads are a complete unknown. XInput is the best way to go if you want controls to just work. For the analog sticks mentioned above, I had to build my own custom XInput device using a Teensy and Zack Littell’s awesome library. Using a Teensy lets you turn any type of input into an Xbox 360 button press. I’ve also recently used a Picade Controller PCB which generates keyboard presses out-of-the-box. It seems very capable since it is based on an Arduino, but it’s been very frustrating trying to dig up the documentation since they seem to have more coverage for their full blown arcade kits than this standalone board (I suspect the forum is the documentation…).

Well, I hope you found something interesting in here and I promise to keep working on a machine. In writing this I stumbled across a previous blog post of mine where someone suggested this IKEA hideaway rolltop would make a cool arcade formfactor and I couldn’t agree more.