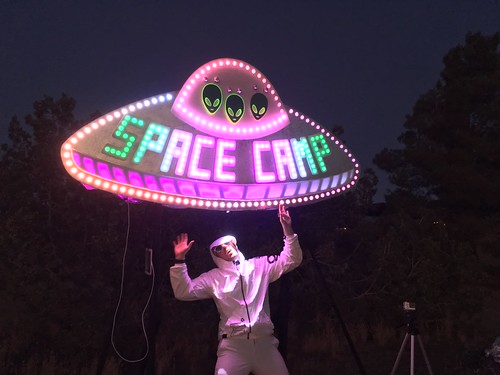 Last summer my friend Laura planned an elaborate surprise birthday party for her boyfriend Eric. We took over a private high desert campsite, built a UFO DJ booth, dance floor, and other alien activity areas. One of the main attractions we built was the animated LED Space Camp sign.

Laura laid out the design and Conor cut the main body of the ship on Two Bit Circus’ router out of 3/8″ OSB. We should have picked a better wood to avoid refinishing. The UFO dome was cut from coroplast but the letters came out so hairy, we cut them again from baltic birch instead. Laura did all the painting and I did all the assembly and wiring. The marquee style lights are 30mm diffuse domes with 3x 5050 RGB LEDs in each one. They have WS2811 controller chips that are individually addressable. The bottom stripe is also coroplast with 75mm LED bars with WS2801 chips.

Four groups of LEDs: the dome, the letters, the stripe, and the perimeter all plug into a PixelPusher. We chose it because it supports multiple outputs and different chipsets and can be used with lots of different software. PixelPusher documentation and firmware is kept in a free forum that you have to register to read; I hate that. We used a full license of L.E.D. Lab on an iPad to let users control the animations. The final touch was a tiny focused flashlight to beam people up with.

The sign (and party) was a huge hit and now it’s hanging in my friends’ warehouse. When I tell people about this project I try to describe why I enjoy building things like this: I know on paper that it’s probably a good idea, but the end result always catches me off guard with how cool it is. You can see two videos below demonstrating the possible animations. Second video shows it in its final form with the blinking EL wire alien heads mounted. More photos from Space Camp are on Flickr.