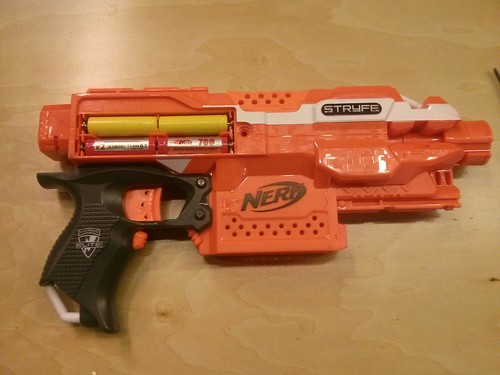 I haven’t been paying attention to Nerf guns for many years. While they still use spring powered air pistons for many of their blasters (the official term) their product line now includes electromechanical guns. Essentially a pitching machine for foam darts. I decided to buy myself one for Christmas to do some hacking. 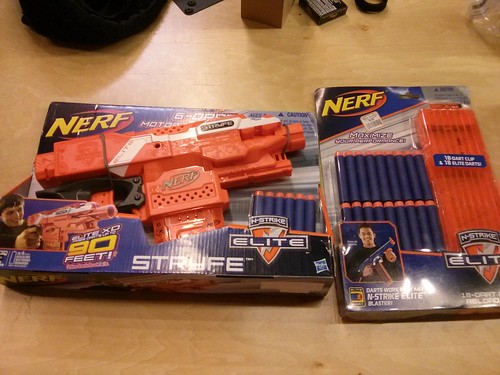 I think this post on Gizmodo was my introduction to modern Nerf arms. It’s about the Nerf Modulus. Nerf has been selling accessories for years but their flagship Modulus fully embraces the assault rifle model of modifying a gun with multiple accessories. This sort of weapon customization is familiar to players of first-person shooters. Nerf sells barrels, stocks, sights, grips, bipods, and high capacity magazines for making your blaster your own. Gizmodo has a nice GIF illustrating this. The sight and barrel mods are all cosmetic but things like stocks and grips can improve the gun’s stability.

Nerf has standardized across their product line how these accessories attach. They have a picatinny style rail system, a twist lock barrel, a clip on stock attachment point, and all their magazines have the same style feed. I liked this idea of standardization; if I designed an accessory, it wouldn’t have to be specific to one particular gun. This has already led to a market of third party 3D printed accessories like this custom stock.

I bought a Nerf Stryfe. It’s a semi-automatic flywheel blaster and costs < $20 and comes with with a 6 round magazine. I’d like to note that this initial hack is just me implementing work that I’ve seen in other people’s videos and read in posts; my goal is to inform/entertain people that wouldn’t necessarily be interested in Nerf and Nerf gun modding.

The Stryfe is designed to run off of 4 AA batteries in series for a combined voltage of 6V. In normal operation, you press the small button below the trigger guard to rev the flywheel motors, then you pull the trigger to push a dart into the flywheels.

To boost the firing velocity of the gun, the first step is to increase the voltage. The go-to is Li-Po batteries which are rated at 3.7-4.2V and in the 14500 form factor they’re the same size as AA batteries. Unfortunately most people have found the common Trustfire brand batteries to not meet their listed capacity or current delivery. The next option is called an IMR. They’re a lithium manganese formulation that is popular with vapers for their ability to dump a lot of current on demand. The idea is you add two 3.7 volt IMRs to run the gun at 7.4V instead of the stock 6V plus you have unrestricted current delivery. You use dummy cells (yellow in the top picture) to fill in for unused battery slots. You could add a third IMR to bring the voltage to 11.1V but that’s well above the DC motor’s design and will definitely shorten its life.

Many people convert their guns to RC hobbyist LiPo packs but I liked the drop in nature of AA sized IMRs. It also gave me an excuse to buy a new charger that works with 18650 sized LiPos. There are a couple things that stand in the way of high-voltage/current usage in a stock Nerf gun: the wire is very thin and the design incorporates a PTC fuse to prevent high current for both safety and reliability. I decided to upgrade the wire, remove the fuse, and remove several safety latches to improve the blaster’s usability.

The first task was removing all of the Phillips screws and splitting the two injection molded halves apart. Here’s what you find inside:

A – This is usually called the “flywheel cage”. It has two DC motors in parallel with a plastic flywheel on each one that accelerates the foam dart. People often replace these motors with higher torque versions used in RC hobbies.

C – This is a combination mechanical and electrical lock that prevents both firing and revving when a magazine isn’t installed in the gun. The mechanical lock is possibly a safety feature to keep you from pinching your finger if you happen to pull the trigger while you finger is shoved in the magazine well. The electric lock means you can’t spin the flywheels without the magazine installed, presumably saving another deliberately stupidly placed finger.

D – This is the mechanical magazine release switch for swapping magazines when you run out of ammo.

G – This is the PTC. In a high current state it will cut out, preventing the motors and/or wiring from being destroyed. 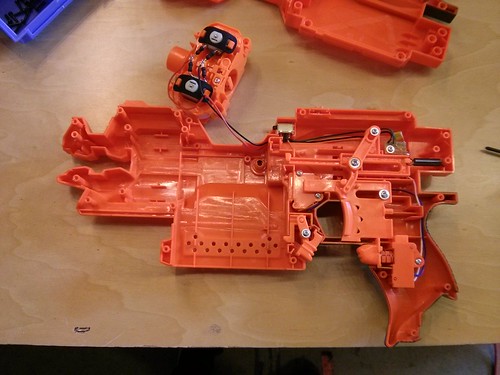 I removed the the mechanical locks at B & C. The dart lock at B is known to interfere with smooth trigger use. C prevents you from testing the trigger pull when the blaster isn’t loaded. I left the lock at E since shoving a dart into non-running flywheels will always cause problems. The photo above shows the flywheel cage removed from the gun ready for electrical mods. 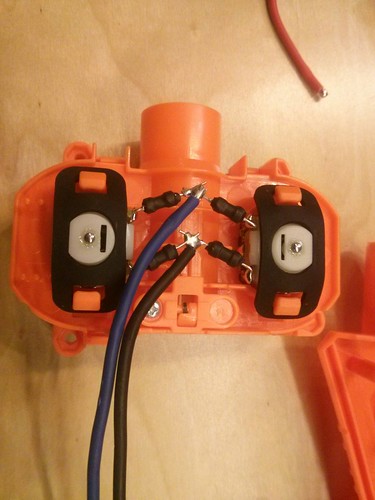 The wire I used for this I believe is 16AWG TXL leftover from building a new wiring harness for my truck. I didn’t really need anything bigger than 18AWG but TXL is really thin wall (and feels great. Really.). The above photo actually shows the same way the factory wiring is attached. Many places describe the black axial components as “resistors” but I found one source describing them as inductors to help with noise reduction which is far more believable. I left them in place since I didn’t feel they’d negatively impact performance. 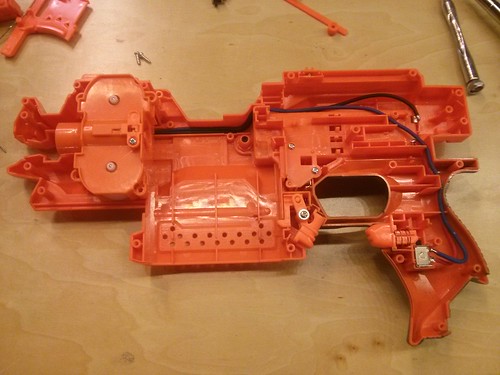 I bypassed the electrical locks at F & C since they add extra resistance to the system and only save you from doing something really really stupid. I did leave the switches in place though since they could be used in a future mod to determine state e.g. when you’re swapping a magazine. Now the circuit just includes the batteries, the motors, and the rev trigger since I completely removed the PTC at G. I stuffed the wire into the same route as before and buttoned the blaster up. 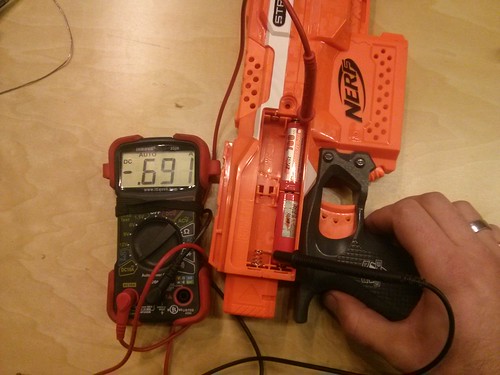 I put a multimeter inline with two IMR cells and two dummy cells to see what the current draw is. It pulled 691mA and sounded fairly angry. That’s nothing compared to when I put in three IMRs and the draw was 2000mA! I won’t run it at that for extended periods since I’ll probably destroy the motors fairly quickly. Here’s an example of the fire rate of a full-auto Nerf gun that’s been chopped down with upgraded motors and three IMRs.

What’s next with this project? I’ll probably paint the gun. My current inspiration is Chris Foss’ Dune illustrations.

Nerf flywheel guns are fairly simple and I feel like designing my own housing. It would support all the standard Nerf features and accessory mounting points but try to be unadorned, compact, and highly functional. I’d source off the shelf motors for the flywheels and build my own cage.

That’s still a ways off but a good excuse to get more time with our CNC mill.

There’s also a lot of potential for electronics mods. I could add live voltage and current readings or RPM of the flywheels. Build a chronograph into the barrel so I know exactly how fast it’s firing. I could add LEDs to the magazine area to charge glow-in-the-dark darts. It could have an Aliens style ammo counter that updates every time you swap magazines (using the built in switch). I’d certainly learn a lot about flyback every time the motors shutdown.

I’ve got a few more photos of this project on Flickr.