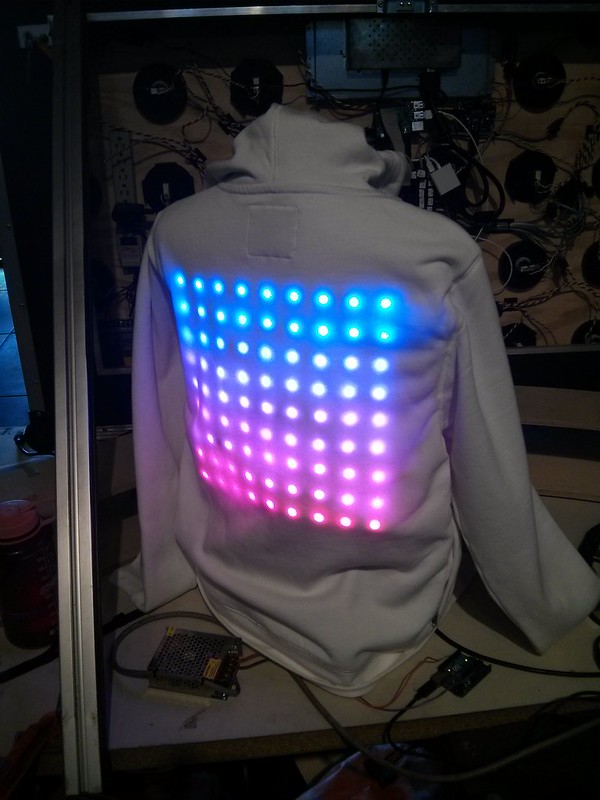 For Christmas 2010, Old Navy stocked a bunch of hoodies with headphones built in for $10. I intentionally purchased a white one because I wanted to use it as a diffuser for an LED project. I finally got around to it in the run up to Fuzzyland. 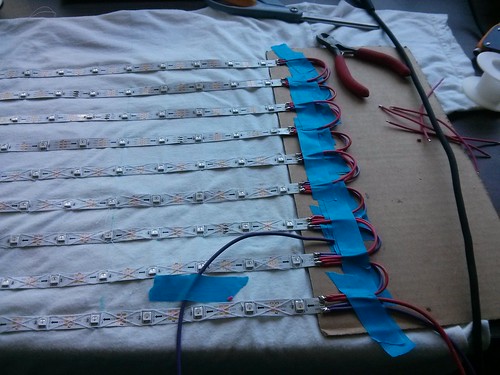 The hoodie has a 9 x 9 matrix of WS2812B LEDs: 9 rows of 30/m strips left over from the Tardis. It’s driven by a Teensy 3.1 with a 12000mAh LiPo battery. I sewed the LEDs onto a t-shirt which I then cut the back off of and stitched into the existing seams on the sweatshirt. This technique gives it a completely seamless appearance. When the LEDs are off, it looks like a normal sweatshirt. I unfortunately haven’t had time to write any pattern code for the sweatshirt specifically. From running the Tardis code on it I’ve learned that the patterns that feature a lot of pixels completely off look the best since it makes it harder to tell the extents of the pixel matrix. I added an XBee socket to the controller as well so I could pick up the beat telemetry data from the Fuzzyland system.

https://www.flickr.com/apps/video/stewart.swf
I’ve already got some ideas on how to improve the hoodie. When taking the sweatshirt to XOXO, I had the LiPo battery fail on me. I wasn’t running it through any sort of monitoring circuit and I have to use specialized chargers to recharge it. The LiPo voltage of 4.2V or less means I can control the WS2812B LEDs with just 3.3V signaling from the Teensy. This works but is definitely a kludge. If I had used a buffer chip to boost the signal to 5V, I could have used any USB brick to power my hoodie when the LiPo died. From now on, I’ll probably always pull the signal up. I’ve already learned to add a cap and resistor to prevent spikes from destroying the first pixel in a strip. I’ll be rebuilding the controller to use a buffer, 5V, and maybe provisions for a different radio. If I sew another one, I’ll look into adding channels for the LEDs in the fabric itself. I’ll also make the light panel completely removeable.

One thought on “LED matrix hoodie”