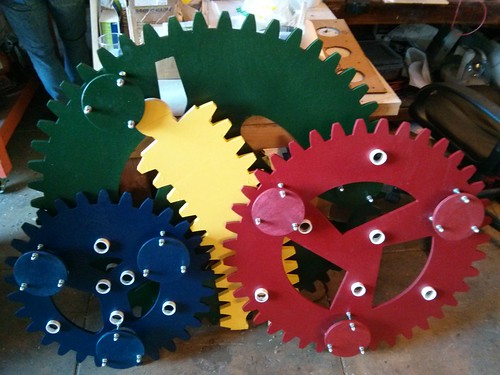 This summer the folks behind Haha Bird posted about the giant sidewalk chalk Spirograph they had made. It has a large ring gear made from interlocking segments. The smaller internal gears ride on 3 casters each and carry the chalk. I thought the design was great and that we should have our own for The STEAM Carnival. Haha Bird had used a plotter and a jigsaw to cut their gears; I luckily had access to a CNC mill. 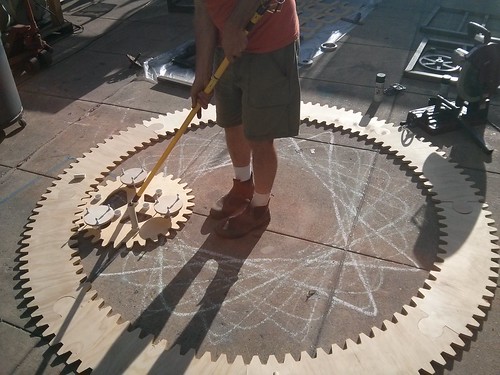 I used an involute gear generator to create the gear outlines. One of my constraints was that I didn’t want the ring gear pieces to use more than two pieces of 3/4″ plywood. I also wanted all the pieces to be identical which meant the number of teeth on the inside and outside of the ring gear had to be divisible by the number of segments it was being broken into. I ended up with a 120/96 ring gear and regular gears of 52, 40, and 30. Adding the external teeth to the ring gear was my only serious change from the original design. I did stylized cutouts of the small gears since I was using a CNC and it added no effort. You can come see it and a lot more stuff at The STEAM Carnival October 25 – 26th at the Port of LA. Use the promo code 5OFF to save $5. You can download my Rhino source file too.

One thought on “Sidewalk Chalk Spirograph”