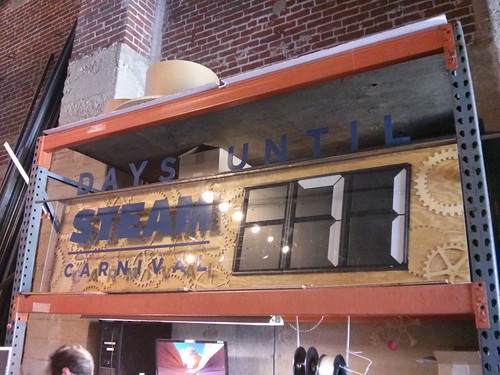 The STEAM Carnival is coming up October 25 & 26th at the Port of Los Angeles. Two Bit Circus wanted a sign for the outside of the venue that would both tell how many days were left and grab people’s attention. Since it had to be daylight visible I suggested we use electromechanical flip displays.

Alfa-Zeta sells 7-segment displays that are perfect for the job. They’re 18″ tall and use an electromagnet on each segment to flip it between blank and white. We got 3 modules and their individual controllers. The controllers have an RS-485 interface and a pair of mosfets for each segment and another line that controls the polarity of the pulse to flip the segment. I used a DS1307 realtime clock module, a Teensy, and an RS-485 transceiver to drive the displays. The clock module isn’t really necessary since the Teensy has provisions to add a crystal and battery to use the internal clock.

https://www.flickr.com/apps/video/stewart.swf
The serial protocol supports two different modes. One lets you send characters to the display, the other lets you use binary numbers to represent which segments are flipped. I had the display show the number of days left until The STEAM Carnival but every 20 minutes it will display a random sequence to grab people’s attention. The display makes a delightful clatter. My coworkers Miya and Gretchen did the awesome design that wraps the display. Come see it at the Carnival. Use the Promo 5OFF to save $5.