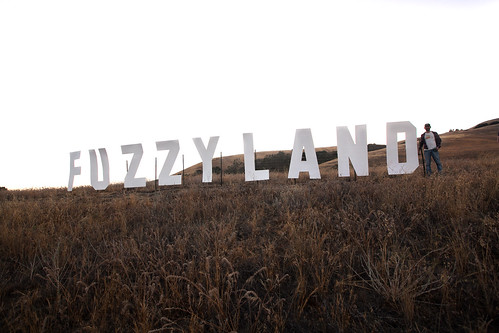 A friend of ours owns a piece of property in the high desert north of Los Angeles next to the Angeles National Forest. He named it Fuzzyland and built a platform treehouse to use as a DJ booth and hosts parties there once or twice a year. We camp overnight and the attendance varies from 40 to 100 people. I’ve never missed an event out there and after the first few I started bringing art to contribute to the atmosphere. 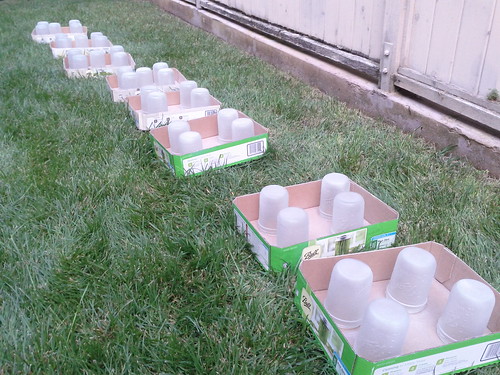 The treehouse is about an 1/8th of a mile down a dirt road from the campsite. The first thing I built was flickering jars to light the path. I purchased 48 glass pint canning jars and sprayed them with window frosting. I purchased candle flickering LEDs from Evil Mad Scientist Laboratory and watch batteries. Now as dusk falls at Fuzzyland, we tape the batteries to the LEDs, tape those to the inside of the jar lids, and then walk the path to the booth distributing them. It’s not very complicated but I know the twinkling lights make a lot of people very happy.

Meltdown Comics enjoyed our Tardis so much that it actually stayed in the front of the store for another 4 months after the Doctor Who art show concluded. We only finally got around to moving it when we knew Fuzzyland was returning. I took the original code I had written and expanded it to include a random complementary color picker, and many many more patterns. My focus in building new patterns was to make them symmetric since it worked well with the mirrors. The only other change was adding a piece of clear acrylic to the front to keep people from climbing inside. Dave, TJ, Bob, and Scott helped me transport and position the Tardis at Fuzzyland. I put it on the ridge facing the DJ booth, but ~200ft away. I wanted people to see some twinkling thing off in the distance from the dance floor and go investigate it. 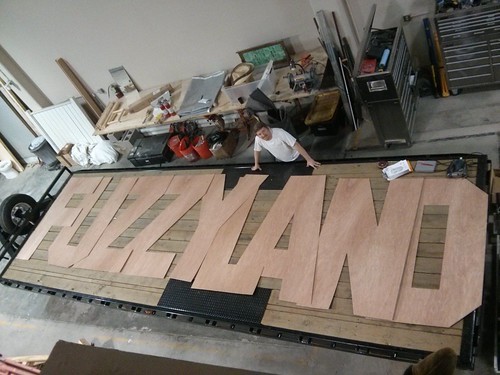 The most recent Fuzzyland party happened in late August. I knew I wanted to do something different than just dragging the Tardis out there again. I pitched Tom (the owner) on building a big FUZZYLAND sign in the style of the famous HOLLYWOOD sign. He thought it was a great idea and gave me money for the materials. I found a typeface that would work and then scaled the individual letters to fit on 4’x8′ sheets of plywood. The final sign would be 6′ tall and 50′ long: 1/7th the size of the Hollywood sign. One of my goals was to build a sign that could stand up to people accidentally falling into it but still be easy to store. Fuzzyland happens so rarely it’s better to store the letters most of the time. The support structure is a 50′ galvanized wire fence attached to 5′ fence posts. Bob and I bought 9x 4’x8′ sheets of 1/8″ luan plywood and then cut them on his CNC router. He then sprayed them with white masonry paint. Before painting, we had glued zip tie mounts to the back of each letter so we could easily attach them to the main fence. 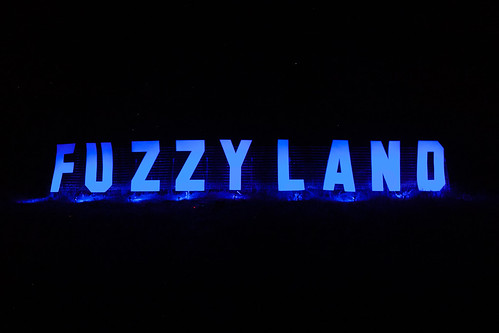 For lighting, we used LED satellite modules from Macetech. We had one of these super bright modules pointed at each individual letter. An Octobar drove 8 of the modules with an additional Shiftbar to pick up the 9th letter. Chris wrote all of the lighting control software. We placed a Beagle Bone Black with a USB soundcard input and XBee radio in the DJ booth. This calculated and then transmitted when musical beats would hit. There was another Beagle Bone Black and radio 200ft away attached to the sign LED controllers which used that beat data to display music synced patterns. It took some debugging in the field but ended up working great! 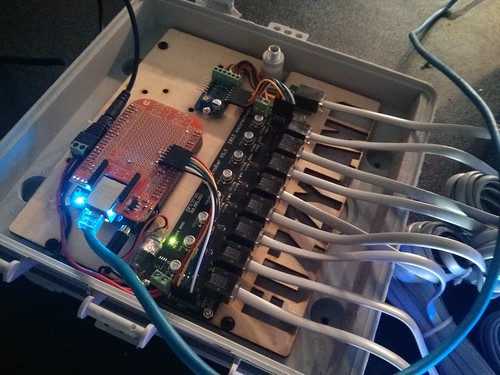 I really enjoyed this project for a number of reasons. It was HUGE yet the design was very simple. I like large pieces like this since they change as you walk around them, viewing them from far away and then up close. The double helix we built for Glow is another example of this. It was site specific. Fuzzyland has some great rolling hills that the sign fits with really well. I had a couple possible spots picked out when I pitched the project but the final site was suggested by a friend of Tom’s. It isn’t visible from the DJ booth but you can see it from the campsite, the path, and if you wander around just outside of the DJ area. The crowd is all LA people so it’s fun to have a sign that spoofs something we’re all very familiar with, but makes us thankful we’re not in Hollywood proper when we see it. It works like the Hollywood sign. As you walk around the grounds, the sign sort of pops into view unexpectedly just like the real deal. It’s permanent. We’ll continue to use it at future parties, and Fuzzyland is the only place you’ll be able to see it unlike most things I build which could be displayed anywhere. We are planning on trying other lighting methods in the future. Most likely we’ll attempt projection mapping next.

Thanks to everyone who helped on this project. Tom Rothrock for the venue and funding. Bob Bristow for constructing the sign. Chris Nelson for programming. David Guttman for lighting. Tacitus, Pinguino Kolb, Scott Nichols, and David Mertl for the installation. You can find more photos of the sign from Tacitus and Pinguino.